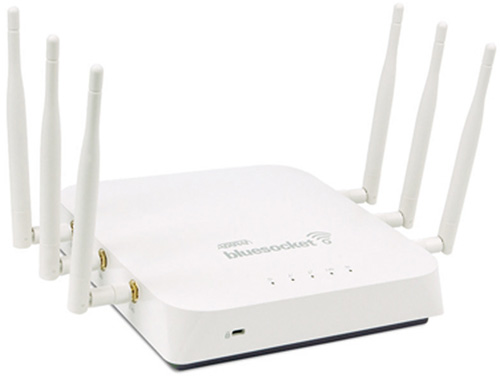 The ADTRAN® Bluesocket® family of high-performance Access Points (APs) is the perfect fit for educational institutions, enterprises, and service providers who are looking to deploy secure wireless networks. Bluesocket APs are completely plug-and-play requiring no manual configuration and deliver optimal performance. Whether you want to add wireless to your office or deploy across an entire campus, the Bluesocket APs are designed to meet your needs.

The Bluesocket 1930 and 1935 APs provide high performance, reliable coverage in ultra-high density wireless environments, such as indoor arenas, conference centers, libraries, and other high traffic areas. The Bluesocket 1930s Series APs support the newer generation of laptops with threestream radio support, and offer higher receive sensitivity on both the 2.4 Ghz and 5 Ghz radios to compensate for Bring Your Own Device (BYOD) type mobile devices such as smartphones and tablets that have a fraction of the transmit power of traditional laptops.

The Bluesocket 1930 and 1935 APs are fully functional with the power delivered by a singleport 802.3af PoE solution.

For high-density Wi-Fi deployments, the Bluesocket 1900 APs do not a include a limit on the number of clients (mobile devices) per radio. Instead, users can configure the maximum number of associated-clients per radio, based on application requirements, to ensure a better user experience.

The Bluesocket APs operate in conjunction with the ADTRAN Bluesocket virtual Wireless LAN (vWLAN), the industry’s first cloud-based control and management software. By removing 100 percent of the controller hardware, Bluesocket vWLAN® eliminates scale limitations, and enables centralized control and management of APs across multiple buildings, the corporate campus or across any geographic location. Cloud control also provides the ability to trouble-shoot APs without physically traveling to each location. Bluesocket vWLAN can be deployed on a no cost vWLAN Virtual Appliance (VMware®) or a low cost vWLAN Appliance (hardware). In addition, ADTRAN offers ProCloud Wi-Fi, a cloud-hosted and fully managed wireless LAN offering.

Unmatched Security at the Edge

The Bluesocket family of APs includes a built-in stateful firewall that enforces security policies at the edge to turn away malicious traffic before it hits the LAN. In addition, with Wireless Intrusion Detection System (W-IDS) as a standard feature, comprehensive user authentication options, support for many encryption protocols, combined with Bluesocket vWLAN’s role-based authentication, ensures a secure wireless environment.

The Bluesocket APs incorporate ADTRAN’s DynamicRF™ radio resource management technology that ensures your entire wireless network is setup with the right balance of channels and power. DynamicRF reduces the effort to setup and maintain your wireless network—the system detects any non-optimal environmental conditions, and can automatically adjust RF parameters, or provide administrators with a recommended list of changes.

Simplified Scalability
vWLAN architecture was designed around a concept of simplified scalability and flexibility. In the era of wireless advancements including 802.11n, voice, and larger wireless networks; maintainability and Total Cost of Ownership (TCO) are at the forefront of new network designs. vWLAN removes the complexities and limitations of dealing with controller capacity by centralizing the management and control functions. Further advantages are gained with security and mobility distributed at the edge of the network, the logical placement in networks that are designed for scalability and high availability. Adding additional access points to the vWLAN system is as easy as installing an ADTRAN software license, which extends coverage to thousands of APs without needing to worry about controller capacity or adding additional hardware.

Unprecedented Wireless Security
The Bluesocket vWLAN solution was designed from the beginning with security in mind from both the client side and network side of the system. The Bluesocket APs control the data plane and include a built-in stateful firewall that enforces security policies at the edge to turn away malicious traffic before it hits the LAN. In addition, with Wireless Intrusion Detection System (W-IDS) as a standard feature, comprehensive user authentication options, support for multiple encryption protocols, combined with role-based authentication, Bluesocket vWLAN ensures a secure wireless environment.

Optimized Performance
With vWLAN, 802.11n system capacity is no longer computed by the backplane capacity of the hardwarebased controller; rather, it's determined by the aggregate throughput of the APs. This is a revolutionary change from traditional, centralized wireless LAN solutions. The vWLAN distributed architecture enables a tenfold increase in total capacity. Because the packet forwarding functionality is offloaded from the controller to the access point, the controller is free to now manage thousands of AP's and tens of thousands of users.

Businesses of all Sizes
vWLAN provides a flexible solution that can operate in multiple deployments from a branch office to a large campus environment while offering a lower cost of ownership and optimal performance. Remote offices deployments are demanding more from wireless LAN solutions and vWLAN responds by integrating flexibility into the security and data forwarding modules. Wireless LAN systems, especially in large campus environments, are expected to provide minimal downtime as they support a significant number of users and critical applications. vWLAN addresses this requirement by providing a seamless, high availability solution that is transparent to the wireless users (with zero packet loss) while also providing flexible deployment options. Virtualization By virtualizing the centralized management and control function and making it available on a hypervisor, like VMware, ADTRAN removes 100 percent of the controller hardware, vastly reducing capital costs and TCO. This in conjunction with the other benefits that virtualization provides like, speedy deployments, infinite scale and virtual consolidation across the organization, makes vWLAN on VMware the most powerful and complete choice for an efficient, secure, high performing and cost-effective wireless LAN solution.